A BRUTAL YET BEAUTIFUL BRILLIANCE 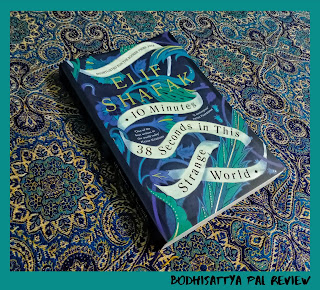 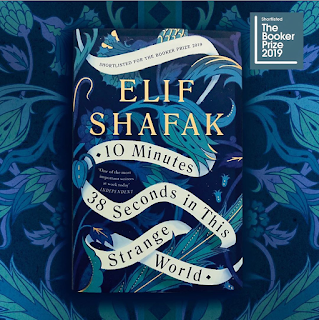 🧿Leila Tequila's body has been left in the dumpster after murder; her heart gave up but her mind was in transition from the day of her birth to the day of being murdered for another 10 minutes 38 seconds! Haven't come across such an original & intriguing premise for a long.

🌀Born into 'not a normal family', Leila's childhood was as normal as a Turkish muslim girl. An over fanatic father, an incoherent mother and an eerie aunt full of secret. Everything was quite fine untill her body & mind gained maturity.

"Little did she yet understand that the end of childhood comes not when a child’s body changes with puberty, but when her mind is finally able to see her life through the eyes of an outsider."

💠Leila's interest towards western culture was growing and then a tragedy appeared. Not a sudden one, but a gradual one. Which finally lead Leila to left her conservative family & she ended up in Istanbul where generally all the soul with dreams use to end up.

🔵Every seconds after her heart stopped was bringing a plethora of memories, linked with a particular taste or fragrance. Everything was in front of her eye, clear & coherent. The memory exposed the story how she ended up in a brothel, how she found her five friends, how she met D/Ali; how she dreamt & how her dreams drained out inchmeal.

🧿The novel is absolutely muti dimensional. Firstly its a beautiful yet brutal poetry of dreams and memories. A heart broken story of the society's answer to a girl who dreamt to cross the border, to be something. It's not just Turkey, or the middle east, it's universal.
Leila's father was the representative of the fundamentalist world, where women have been ill treated everytime, in their house or out of their house. Sometime a brothel, a hawk eyed society or a house with forced marriage not really meant any difference.

💠Shafak also highlighted the sexual violence of Turkey. Unfortunately she has to face legal enquiry for this. That's shame for the literature & humanity too.

🌀The second part of the novel revolved around Leila's five friend. A Somalian victim of trafficking, a transgender, a Lebanese dwarf, a Mesopotamian singer - all four women and a man from Van, Leila's childhood friend. They had one thing in common - somehow they are more or less unnatural‌ & undesirable in the eyes of society. The novel portrayed a beautiful image of unconditional friendship. They all are strikingly different from each other, still they are most close to each other.

"They were more vulnerable on their own; together, they stronger."

🔷The story was belong to the city Istanbul, as much as Leila. Elif Shafak showed her passion for the city through her magical writing. She imagined Istanbul as an  “..illusion. A magician’s trick gone wrong.”
Sometime as a liquid city not yet solidified. She gave a feminine soul to Istanbul & ironically described how it have been humiliated by the phreneticness & violence.

🌀The novel handled the conflict of religion & modernity masterfully. We can experience Zayneb122 & Nostalgia Nalan's peaceful coexistence, one highly bigot & other one quite infidel. Also the 'Cemetry of Companionless' hold a special meaning, indicating the pain of solitariness.

🧿D/Ali - an attractive artist character with an anti-fascist mind & comrade spirit & off course the love interest of Leila. His appearance indicate that even those with worst of fortune can feel the taste of love sometime.

🌀I am literally hypnotized by Elif Shafak's writting style. Her magical, mystic lyricism made this novel a magnum opus. The writing has a sedative effect, neonish glow & sensational appeal. Satisfying structure, intellectual storytelling & the depth of emotion made this novel other worldly beautiful.
Actually apart from the main novel, the dedication part & the Thanksgiving part are equally magical.

"After all, boundaries of the mind mean nothing for women who continue to sing songs of freedom under the moonlight..."

You can sense it's brilliance just from these two lines.

💙We can get some unforgettable characters here, Leila's eerie aunt, Leila's best friend Nostalgia Nalan & more. Character building & their motives were decent enough. Though I find Sinan's character building little weird, starting as a promising boy but finishing like a pretentious man.

🐟The Blue Betta fish summarize the focal theme of the novel. This indicated the singularity of life. In that magic realistic scene, the fish asked, "What took you so long?" - brings the concept of 'Maya' or 'Cosmic illusion' in front of the reader.

"Her mother had once told her that childhood was a big, blue wave that lifted you up, carried you forth and, just when you thought it would last forever, vanished from sight. You could neither run after it nor bring it back. But the wave, before it disappeared, left a gift behind – a conch shell on the shore. Inside the seashell were stored all the sounds of childhood."

🌀Not only childhood, all the sounds of a whole life stored in the brain of a dead body, in the memories of the near ones, in the bustle of this strange world. Beside everything, I find this novel as a memorandum of memories & transition of soul finding relevance of life. A brutal yet beautiful brilliance! 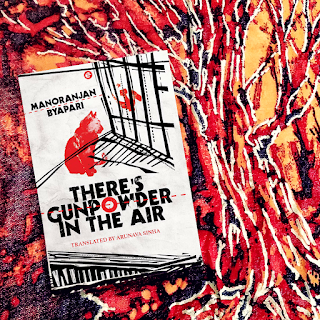